Cystic fibrosis (CF) is a genetically inherited disease that affects a protein in the body. This protein affects the body’s cells, tissues, and the glands that make mucus and sweat.

People with cystic fibrosis received two copies of a recessive gene that causes mutations in the cystic fibrosis transmembrane conductance regulator (CFTR) gene. This means that both their mother and father both carried at least one copy of the recessive CFTR gene.1

People with CF inherited two copies of a defective gene — one copy from each parent. The CFTR gene is located on the long arm (q) of chromosome 7 (7q31.2).2

People with only one copy of the defective CF gene are called carriers. Carriers do not develop CF because they have a dominant gene that causes their CFTR protein to be handled correctly in the body.

However, if the mother and father each carry the recessive CFTR gene, the chances their children will develop CF are:

These chances are the same each time two CF carriers have a child. 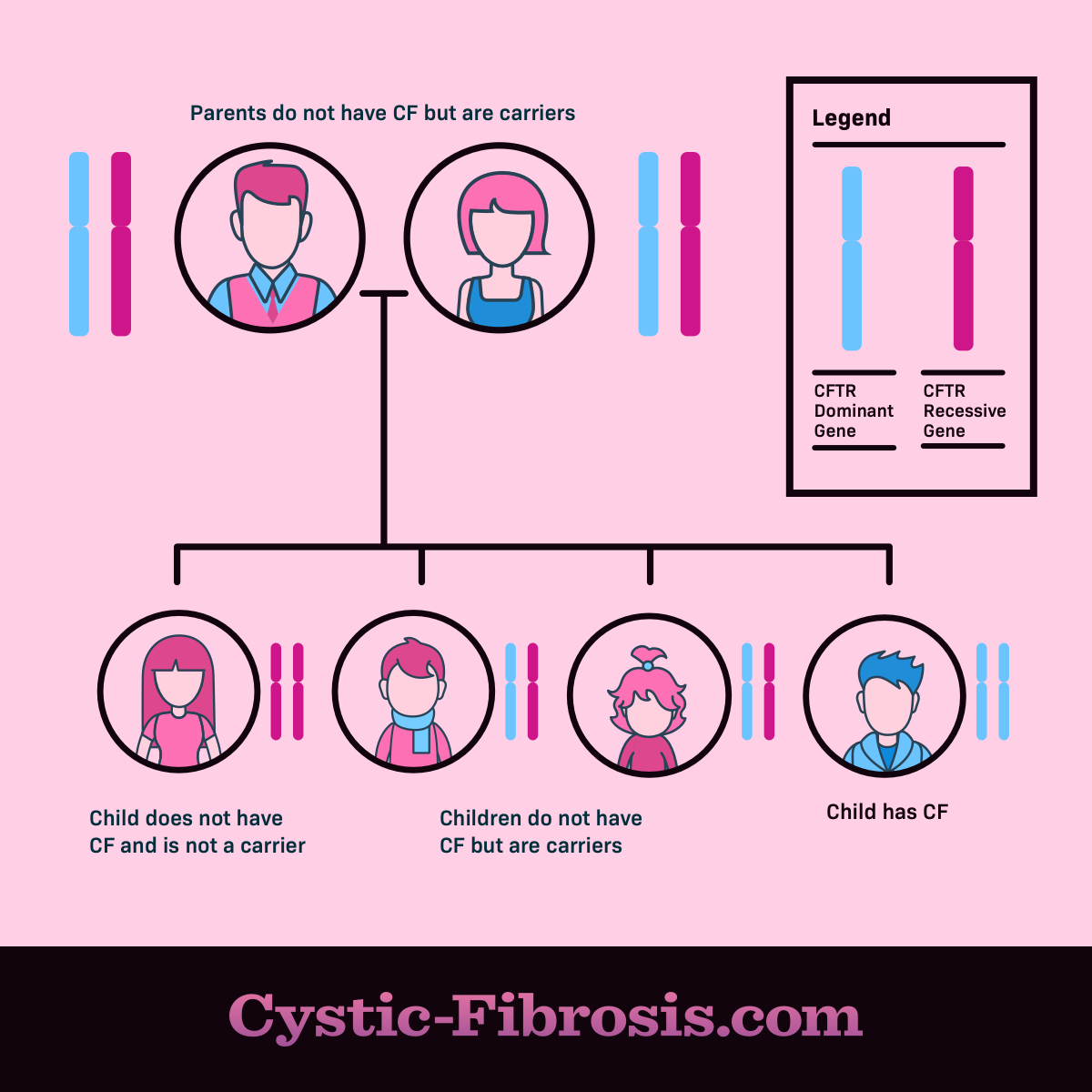 Having children when you have cystic fibrosis

People with CF are living longer than ever, which means they may have the opportunity to create their own families. If someone with CF who has two copies of the recessive CFTR gene has a child with a CF carrier, the chances are:

The CFTR gene is responsible for giving the body instructions on how to handle the CFTR protein, which is located in the exocrine system. The exocrine system includes every organ of the body that makes mucus, including the lungs, liver, pancreas, and intestines, as well as sweat glands.

With cystic fibrosis, mutations in the CFTR gene cause the CFTR protein not to work properly, which leads to thick, sticky mucus that blocks the lungs and pancreas. The CFTR protein also impacts the liver, intestines and kidneys, the ears, nose and sinuses, sex organs, and the bones and joints.1

The Cystic Fibrosis Foundation estimates that there are more than 1,700 known mutations of the disease. This variation explains why some people with CF show few or no signs or symptoms, while others experience severe symptoms and life-threatening complications.2

How common is cystic fibrosis?

Cystic fibrosis is the most common, serious recessive genetic disorder among Caucasians living in the U.S. Approximately 1 in every 3,200 live Caucasian births have CF, compared to 1 in 15,000-17,000 live African American births.2

In the U.S., the number of people who carry a CFTR gene mutation averages:

About 30,000 people in the U.S. are living with cystic fibrosis, with 1,000 new cases diagnosed each year. Males and females are equally affected.2 Thanks to newborn screening in all 50 states, cystic fibrosis is usually identified soon after birth, though in milder cases the person may not be diagnosed until adulthood.3