How Long Do Patients with Cystic Fibrosis Live?

This progress resulted from many medical advances in CF treatment and advocacy by patient groups such as the Cystic Fibrosis Foundation (CFF). The Foundation began a patient registry in the 1960s that tracks the care each patient with CF receives. This data is then used to create improve the quality of care and drive related research and drug discovery.1

Looking back at the history of cystic fibrosis life expectancy

Prior to the 1950s, children with the most common and most serious forms of cystic fibrosis rarely lived past age 5. In the 1950s and 1960s pancreatic enzymes, airway clearance techniques, and antistaphylococcal antibiotics were introduced as treatments and CF life expectancy began to increase.

In the 1960s, average life expectancy grew to age 15 as antipseudomonal antibiotics were added to the treatment arsenal. Also, the first woman known to have CF had a successful pregnancy. Between the 1970s and 1990s, life expectancy gradually increased to age 31, thanks to still more treatments, including lung transplants and DNase. 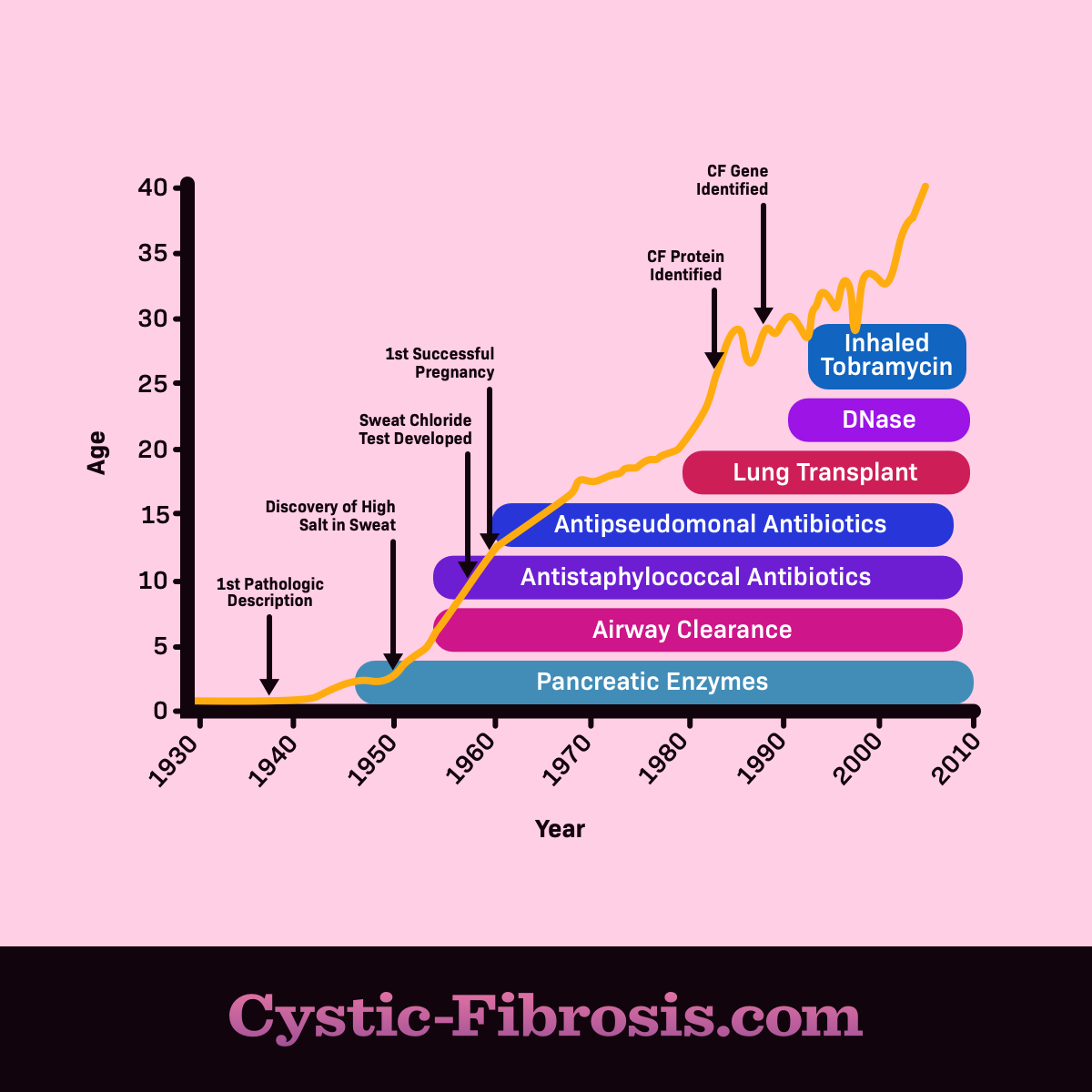 A 2017 study looked at patient registry statistics in the U.S. and Canada, comparing 110 U.S. care centers with 42 Canadian centers, and found that those born in Canada tend to live 10 years longer. The difference in CF life expectancy seems to be connected to access to lung transplants, post-transplant care, and differences in the two countries’ health systems.3

According to the CFF’s Patient Registry, children with CF grow up to lead full, productive lives despite their disease. In 2017, the registry found that:

Thanks to advances in DNA testing, doctors are identifying more and more people with CF for the first time well into their 50s, 60s, and 70s.

While doctors once thought that these outliers had a less severe form of cystic fibrosis, now some doctors believe these patients have delayed CF. One study found that people diagnosed past age 40 had equally severe lung disease as those diagnosed in childhood.6

While doctors know more than ever about CF, they still cannot reliably predict which patients will become long-term survivors based on their DNA results. Research seems to indicate that body weight, insurance coverage, ability to buy CFTR modulators, the latest group of CF drugs that improve the function of the CFTR protein, may have an impact on long-term survivorship.5,6

Cleaning And Disinfecting Your Home For Cystic Fibrosis

Birthdays Through the Lense of Cystic Fibrosis