My Life with Cystic Fibrosis 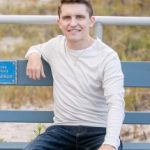 My name is Craig Konowal, and I was diagnosed with CF at birth. I was able to get an early diagnosis because I had an older sister who passed away from CF before I was born. The doctors knew to test me right away and, sure enough, I had it.

Growing up with cystic fibrosis

Growing up with CF is very difficult. That’s putting it mildly. For the most part my lungs functioned pretty well. I had to deal with a lot of side issues. GI problems were one of them. I also had a very hard time gaining weight, which is common with CF. Except, for me, it was harder than the average.

I eventually needed a stomach tube placed at the age of 15. It worked very well. I no longer have it, but to this day it is still a struggle to maintain weight. I also have chronic kidney stones, which are very, very painful.

When I was 16, I walked into a boxing gym and it changed my life. My lung function improved, and it also helped with weight. After about a year of training, I started boxing at a competitive level, which I did for about 6 years.

Going through a surgery gone wrong

Unfortunately, at the age of 23, I needed a port placed because my veins were shot due to the amount of PICC lines I had placed for antibiotic treatments. During the surgery, the surgeon made a mistake that changed my life forever. It was supposed to be an easy outpatient procedure, but that was not the case.

My lung was somehow punctured during the operation and I needed a chest tube placed. After the chest tube was placed, I was admitted to the hospital until my lung healed. Unfortunately, my chest tube suction wasn’t turned on for about 8 hours, up until the shift change when my new nurse came into my room and noticed right away. But the damage had already been done. My lung did recover but I would never be the same after that.

About a month later I was back in the gym to train. I noticed after a few weeks that I just couldn’t keep up. It was devastating. My PFT’s were in the high 70’s-low 80’s before the port placement.

Over the next 3 years my lungs dropped into the 20’s, despite everything I had tried. Now, at 26 years old, I needed a life saving double lung transplant. Due to the rate my lungs were failing, the chances of even surviving long enough to get a call for lungs was very low. I had started my testing for a transplant, which is a very long and painful process. It could take up to six months or longer to receive a call for lungs. And it might not even be a match.

On the very last day of testing, my phone kept ringing and ringing. I noticed it was the hospital calling. I didn’t answer because I had just spent 7 days in a row there for 7 hours each day. What could they possible want from me? So I ignored the calls. Then I heard a text come through. It was my pulmonary doctor telling me to call ASAP. In that moment I knew what was happening. I was sick to my stomach.

I called back and they said there was a pair of lungs for me waiting, and they need a yes or no. What was I supposed to do? I wasn’t ready! I wasn’t even officially placed on the list yet. So how could this be happening?

It took some convincing from my grandfather and my best friend to say yes. I called my doctor back and begged him to give me some info. He told me there was a young man who is passing away and his mother somehow knew about me and decided to directly donate his lungs to me. Once I heard that I couldn’t say no! I have seen what losing a child does to a mother, and I wouldn’t let her son pass away for nothing. If a piece of him could live on through me I will do it.

I went to the hospital and started the process. Miraculously, this man and I were a complete match. This was a direct donation that was a match. This was unheard of! It has never happened before! Luck just doesn’t justify it.

My whole family and best friends were at the hospital with me. I eventually was wheeled into the operating room and was put to sleep and woke up a few days later. I had complications, but I made it. Looks like all the training finally paid off, because it had saved my life because of how strong my heart was.

I have just celebrated my 30th birthday, and I am engaged to the love of my life. I had met my future wife about six months post-transplant, which is an amazing story of its own. I am so grateful to be here – finally being able to breathe free.

Engage with the community by
asking a question, telling your story, or participating in a forum.