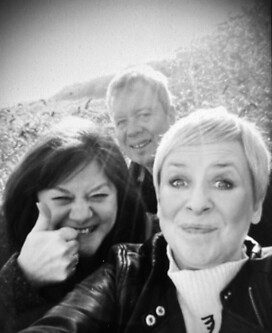 I purposefully took my time considering whether or not to publish a recent blog about my experience with Trikafta/Kaftrio as expectations of the drug are still so high and I’ve been wary of sharing my negative ordeal but I feel it's a valid story nonetheless. My main motivation for sharing is that this could help someone else who may be struggling, I want them to know they're not alone.

I wish more than anything that this was the positive ‘miracle story’ that I’ve read so much about but for me this drug was more miserable than a miracle. My journey began early 2020 when I had a unique opportunity to start the drug before it was available in Wales (UK) on prescription, for that reason I was unable to discuss my experience with my CF peers. Which was incredibly difficult in itself, I sometimes felt very alone in my thoughts. I also felt incredibly guilty that I was starting Kaftrio before my friends (there's that infamous CF guilt again, if you know you know).

For the first time in my life I had started focusing on the future, something I’d never let myself do before. I’ve always taken one day at a time & enjoyed living in the moment and it’s something I’ll have to do again having faced the biggest disappointment of my life.

Looking at that picture brings a tear to my eye if I’m honest and honesty is why I’m writing this, it was the day I was filled with so much hope and of course my parents must be deeply affected by it too. (See uploaded pic).

When I first began taking Kaftrio I had severe headaches from the first day, in the early stages a sleep or lie down would help temporarily and I was being told if I persevere they were likely to get better. Three months later I had an unexplained intermission in the headaches and I thought “this is it, this is how I’m meant to feel”, it was exciting! My lungs and sinuses were improving, my lungs saw a 15% lung function increase, I had no mucus and I didn’t cough AT ALL. I remember my Mum jumping out of her skin when I “snook” up on her in the kitchen, in other words she didn’t hear my cough arriving before I did.

The awful headaches sadly returned and I started feeling unwell which led to a course of intravenous antibiotics, something at the age of 39 I’m very used to. When the IV treatment ended I had daily migraines sometimes lasting for 2-3 days at a time and functioning was becoming increasingly difficult, as well as that I was so sound sensitive that even talking became arduous. Those that know me know how important listening to music is and I couldn’t do that for 6 months or more. I’ve never experienced brain fog like it, I was doing daft things all the time, forgetting words and I forgot my D.O.B. at a hospital appt. Dizziness & tinnitus also became the norm after those IV’s but it’s still unclear if it was Kaftrio or the IV's that caused it but all I wanted to do and for the most part all I did do (for months) was sit in a quiet room, not talk and not move. No surprise I didn’t drive myself anywhere either.

Diary extract 14/8/20:
"I do have major concerns because of these side effects, feel like I’m drudging through quicksand at the moment but I’m desperately trying to remain positive.'

Once shielding had paused here I was adamant I would do a bit more but I cannot explain how difficult that was, severe fatigue to boot. I did manage to go to the beach with my parents but I felt like something from The Walking Dead. Got to the beach, lay down, closed my eyes for two hours and then went home. I felt so fragile and I was starting to look unwell too.

Shielding began again and I of course managed a few online Zoom catch ups but they were draining and more often than not it felt like I was watching my friends on TV rather than interacting with them, I didn’t bring much to the party.

On 22 Nov. 2020 I made the decision to stop taking it. Despite everything I was feeling it was an incredibly tough choice as I thought it was my only option it was the “miracle drug’ after all. Luckily I have no regrets whatsoever despite my lung function returning to what it was pre-modulator drugs.

My consultant believes those rotten side effects were something to do with CFTR protein in the brain and suspects it was the Elexacaftor which is one of elements that makes up the triple therapy. Since I’ve stopped the drug I’m VERY relieved to say they have disappeared!!!

My CF Team have been so supportive although at times in my zombie state I felt I could of done with some more guidance (someone to make the decision for me). However these drugs are so new it seems we are all learning together. I trusted my gut in the end and I’m so glad I did.

Going through something quite distressing like this especially during a pandemic has been so bizarre to say the least and those who have had to live it with me are of course my Mum & Dad. They witnessed the dramatic change in me, not just physically but my whole personality changed according to my Mum, they were so relieved when I decided to stop taking it. They wanted their daughter back!

I’m happy to put the Kaftrio/Trikafta days behind me and I’ve already started to work on my confidence, I feel awake again and determined to remain the resilient person I've always been. I have my 2nd COVID vaccination on 20 April and I can’t wait to start making some good memories again!

Birthdays Through the Lense of Cystic Fibrosis

Please read our rules before commenting.

Have you taken our In America Survey yet?